On Thursday evening, the cast and crew of Starz’s ‘Spartacus’ franchise walked the red carpet at the MoMa in New York City for the latest, and final, season premiere. The east coast launch of the final season saw the recent People’s Choice Award nominated cast walk the red carpet and then participate in a Q&A panel before the audience was treated to a screening of the first episode.

In attendance at the event were some of the leading stars of the series including Lucy Lawless, Liam McIntyre, Peter Mensah, Todd Lasance, Manu Bennett, and Dustin Clare, as well as series creator, Steven S. DeKnight, who all walked the red carpet. When asked on the carpet about the anticipation of the exciting final season DeKnight said “the spectacle is all there, the show is bigger than ever. People will be left with the drama and the impact and powerful, powerful finale we have planned for the season. This season there is a lot of gray morality. The heroes definitely get their hands dirty.”

After the red carpet wrapped, industry insiders and some lucky fans of the show were ushered into one of the MoMa’s theatres for the Q&A panel. Cast members dished about the shows past and current seasons. A highlight of the panel was when laughs filled the theatre because Lucy Lawless shared her take on the graphic nature of the show. On her many sex scenes, Lawless said “love is what you do at home, sex is what you do at work”. After the moderator’s questions were answered and select audience members asked ones of their own, the panel wrapped and guests were treated to an exclusive screening of the premiere episode. The final installment of the franchise, ‘Spartacus: War of the Damned’ will made its television debut yesterday on Friday, January 25th on Starz.

Spartacus: Gods of the Arena 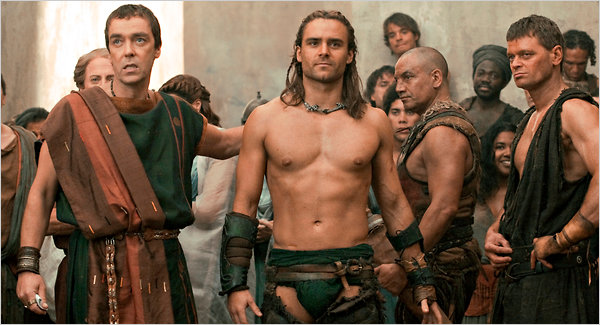 John Hannah, left, and Dustin Clare in “Spartacus: Gods of the Arena,” starting Friday on Starz.

The Adventures of Spartacus Sixpack

Like AMC’s “Mad Men” the latest series on Starz is a period drama in which the patriarchy dominates, the class system is rigidly delineated, and the cultural attitude toward drinking has yet to fall under the punishing heels of recovery and restraint. As its name suggests, “Spartacus: Gods of the Arena” (beginning on Friday) is set well before the advent of Alcoholics Anonymous but right during the high moment of extreme sports. Specifically we are in the late 70s B.C. in the ancient city of Capua at a Roman gladiatorial campus where dorm life leaves the shenanigans at the Big Ten looking fairly pathetic.


“Spartacus” belongs distinctly to the swords-and-sandals school, one turning into a specialty for Starz, the premium-cable channel striving for the status of HBO and Showtime. “Gods of the Arena” spins a six-episode back story from last year’s initial installment, “Spartacus: Blood and Sand,” which charted the rise of the Thracian gladiator who led a slave rebellion against the Roman ruling class from 73 to 71 B.C.

The plan originally had been to film a sequel, but when the actor portraying Spartacus, Andy Whitfield, learned he had a recurrence of cancer and became unable to work, the network decided to look for a related narrative not dependent on his character.

The result is a production even more fantastically soapy than the first, visually elevated by an apocalyptic video-game look in which the orgiastic sex and violence are presented with a studied, syncopated choreography. Technologically we’ve come a long way from Stanley Kubrick’s “Spartacus” in 1960 and the 1976 BBC series “I, Claudius,” so that something even as fundamentally absurd as “Gods of the Arena” can be said to bear the sophistication it does not necessarily possess.

The current series revolves around the historical figure Batiatus, owner of the Capua slave-gladiators, and Gannicus, in particular, played by Dustin Clare, who appears as a kind of vainglorious hybrid of Colin Farrell and Fabio. A champion in the field, Gannicus is poised to bring his owner greater and greater glory. As the proprietor of a sports franchise who has also fallen under the shadow of his politically dominant father, Batiatus reminds one of George W. Bush during his Texas Rangers phase.

Batiatus is portrayed exuberantly by John Hannah, the Scottish actor emblazoned in our minds as the mourner who recites Auden’s “Funeral Blues” at his lover’s memorial service in “Four Weddings and a Funeral.” Accustomed to playing softies, he seems thrilled at the chance to swagger and do gutter talk.

There is plenty of it in the series, as well as group sex, gay sex and opium-induced hallucinations. Starz is currently run by Chris Albrecht, who guided HBO when it created much of its finest programming, so comparisons with “Rome” are doubly inevitable. The two ventures are alike in togas only, with “Rome” offering a greater depth of historical curiosity.

“Gods” signals its campiness fairly emphatically with the appearance of Lucy Lawless from “Xena: Warrior Princess” as Batiatus’s driven and calculating wife, Lucretia, a woman with an out-of-town bisexual best friend (Jaime Murray) who arrives in Capua as the ancient world’s gossip girl in chief. At first glance we suspect that she has packed trouble in her luggage, and that her hostess gift is not a scented candle.

The arrival of the “Spartacus” series while Suzanne Collins’s “Hunger Games” trilogy has been dominating best-seller lists with its futuristic gladiator theme suggests there is an appetite for stories of class warfare in the bloody, fatalistic extreme. (In the books the oppressed are pitted against one another in live death matches streamed on television.)

In another time it was gratifying enough to witness the inanities of the very wealthy on “Dallas” and “Dynasty,” but now perhaps we want to know that a more egregious fall is destined. Swords and sandals offer the hope and the promise.

Gods of the Arena

When there’s a casting call to portray one of the vamps or werewolves on HBO’s True Blood or a Roman soldier on Starz’ Spartacus, the aspirants know one thing: They’d better be jacked. When it came time to cast Spartacus: Gods of the Arena, a prequel to the original hit series, one winner emerged: Dustin Clare, an acclaimed Australian star making his U.S. TV debut. “Dustin turned up in pretty good shape,” says key stunt fight coordinator Allan Poppleton. “We just had to mold him to suit the ‘Spartacus Machine’—make him a little more lean and mean.”

“I always try to stay pretty fit and active,” Clare told MF. “When I’m not working, I weight train three times a week and swim and surf as much as I can —in the summer, you usually find me in the water.”

To transform Clare into a killing machine from the history books, Poppleton put him, as well as the cast’s other actors and stuntmen, through a three-week boot camp of rigorous cardio, weapons, fight training—and plenty of gym work. “We wanted to burn a lot of calories to reveal the actors’ abs, while also teaching them to realistically handle their weapons when it came time to film a fight scene,” says Poppleton.

Workouts began at 90 minutes each and progressed up to four hours a day, five days a week.

Each workout session began with what the crew called the “circle of death.” The group formed a circle, then lifted and tossed heavy sandbags and medicine balls to one another. Then came gymnastic moves, footwork drills, and sparring with swords, spears, and daggers. Each day ended with MMA-based conditioning circuits, including sled pushes, battling ropes (swinging a long rope up and down as fast as you can), kettlebell and sledgehammer swings, and tractor-tire flips. "The circuits usually lasted 30-40 minutes, and we got maybe two five-to-10-minute breaks over the whole four-hour session," says Clare. "Sometimes we even wore weighted vests to make the workout tougher."

To get truly lean, Clare also had to change the way he thought about food—particularly with regard to making smarter choices. Meals on set included lean meats, plenty of fruits and vegetables, and an occasional indulgent dessert. "It really helped out the actors to have the right options readily available," says Clare. "It gives you a really big advantage over having to do it all on your own."

Once filming began, the Spartacus crew spent their downtime focusing on maintaining their gains. "After boot camp, it's really up to us to stay in shape," says Clare. "I weight train on Saturdays, and Sunday is a rest day. On set, we have a small gym set up with bars, kettlebells, sandbags, and a Swiss ball. Everything is extremely functional. We need to stay flexible and strong to do the kind of fighting we do on set."

Clare's favorite technique he's picked up while becoming a gladiator? "The 10 to One," he says. Pick eight to 10 exercises—one for every major muscle group—and do them as a circuit. Perform 10 reps the first time through and then rest 30 to 60 seconds. repeat for nine reps, then eight, and then so on down to one rep each. "You'll really burn, but int he best possible way. After all, if I'm not keeping fit, I'm not doing my job."

Which is being a lean, mean fighting "machine."

The program begins by introducing the audience to four dashing young airmen: Norman Brearley, Charles Kingsford Smith, Wilmot Hudson Fysh and Paul McGinness. These four shaped the nascent Australian aviation industry, though only one would achieve the curious immortality of having the nation's busiest airport named in his honour.